HEVC to work around weak bandwith / Use of HEVC transcoding on Wowza 4.4 to lower bitrate

The 5th Gaming-Gen event in Gardanne – France took place on the 22th until the 24th of April 2016.
This event was organized by a non-profit organization for the youth of Gardanne city.

Once a year they organize a video game tournament with also an area dedicated to gaming in general (arcade retro-gaming, geek art, 3D modeling …). This year local companies looking for young talents can also leave their job description to hire junior people.

For the first time this event was rebroadcast over-the-top on Internet with a live stream coming from the game challenge (CS-GO) and from the event place.

The live stream was produced by the team

LifeStream who provided real-time comments, video editing and playout on the game side.

The challenge for the live was the poor bandwidth. After hard negociations with telecom operators the final upload bandwith was 3Mbs max thanks to load balancing on multiple grouped lines. 3 Mbs For gaming was quite tricky!

To allow keeping the quality as good as possible we used the HEVC (H.265) codec that compress video better. We didn’t care about 4K as we focused on the bandwidth saving.

The (crazy) idea was to have a local Wowza server that was using the HEVC transcoder do send the stream out of the event place and push it to another server in the cloud. This last one transcoded again (for compatibility with player and Twitch broadcast platforms) to H.264. 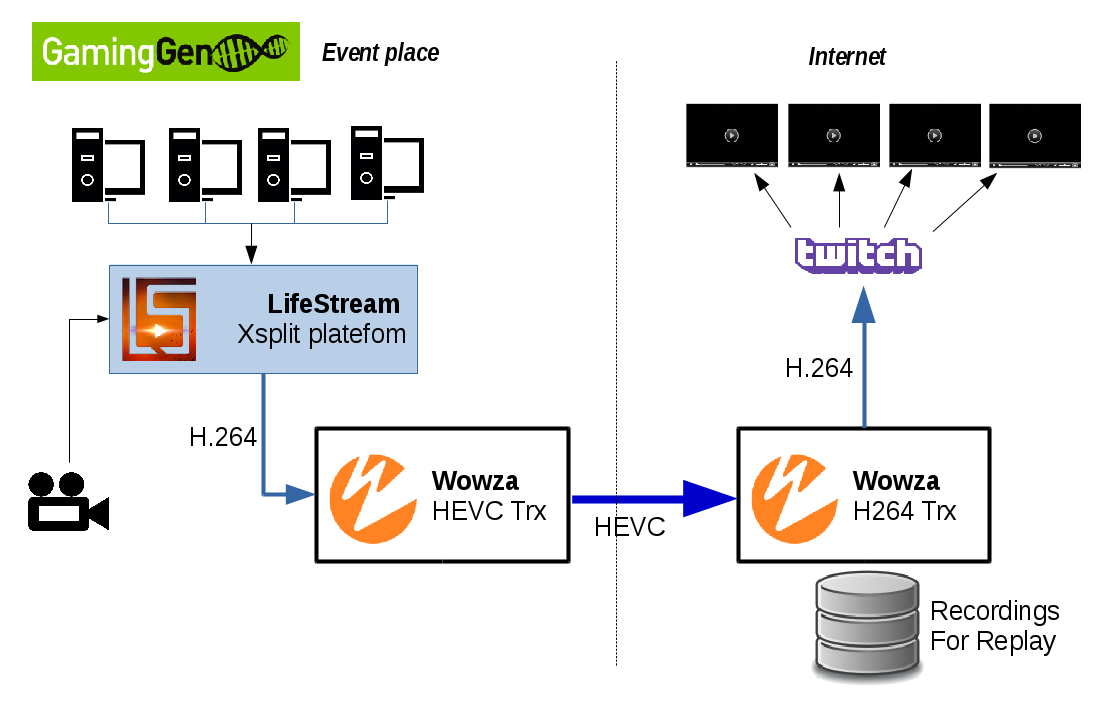 The tests already made show a satisfying compression ratio with a little compromise on quality: 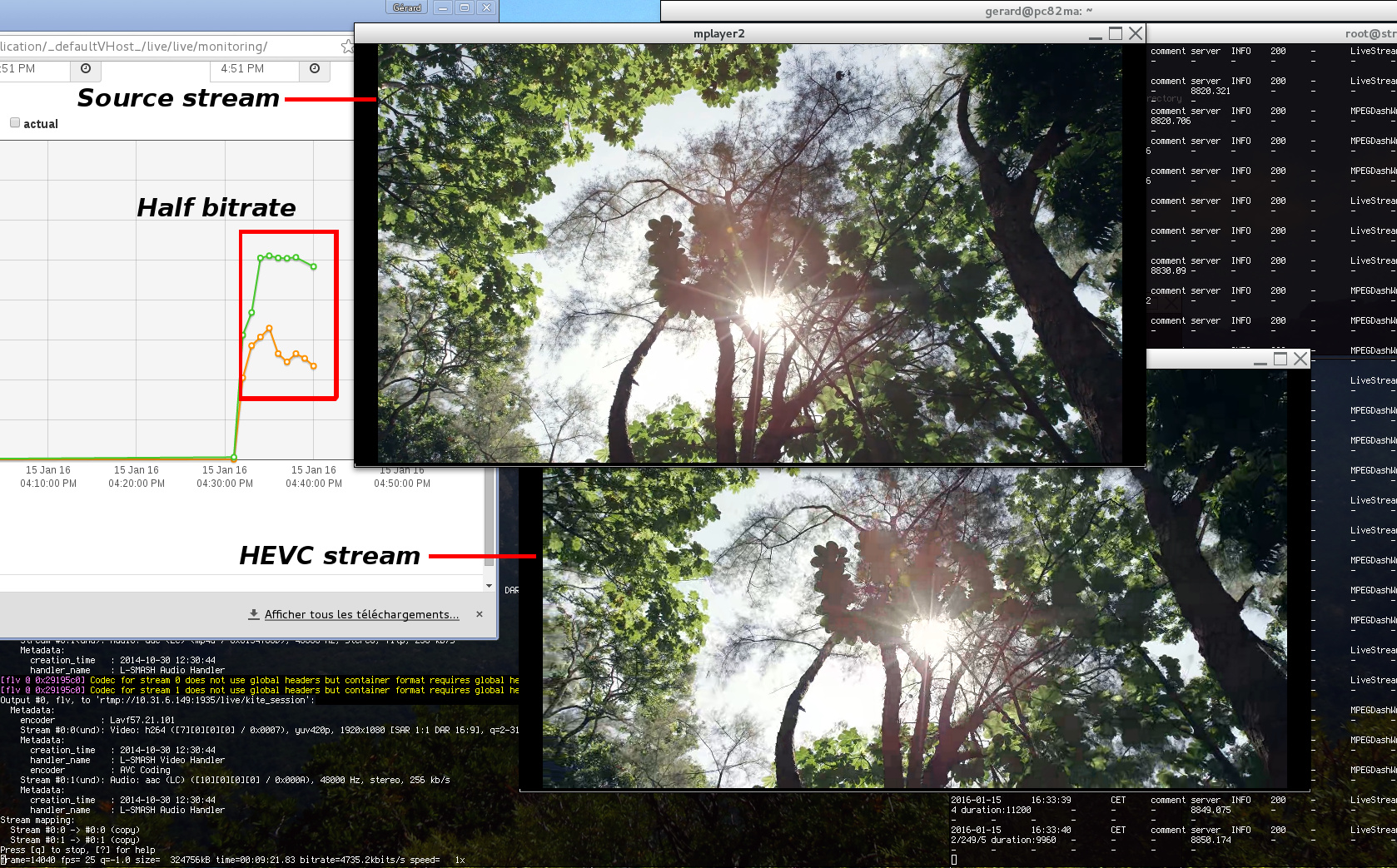 Incoming H264 stream reduced to half

The difference with the test already made was that lifeStream had to use a GPU encoder on their main machine to allow real-time video editing on multiple input. Thus the H264 encoding parameters were not quite the same as the test (higher profile) so even the HEVC stream was different and the cloud virtual server required more CPU to transcode back to H264.
After experiencing some glitches in the video we decided to send directly an H264 transcoded stream to Twitch and keep the HEVC workflow as a backup: 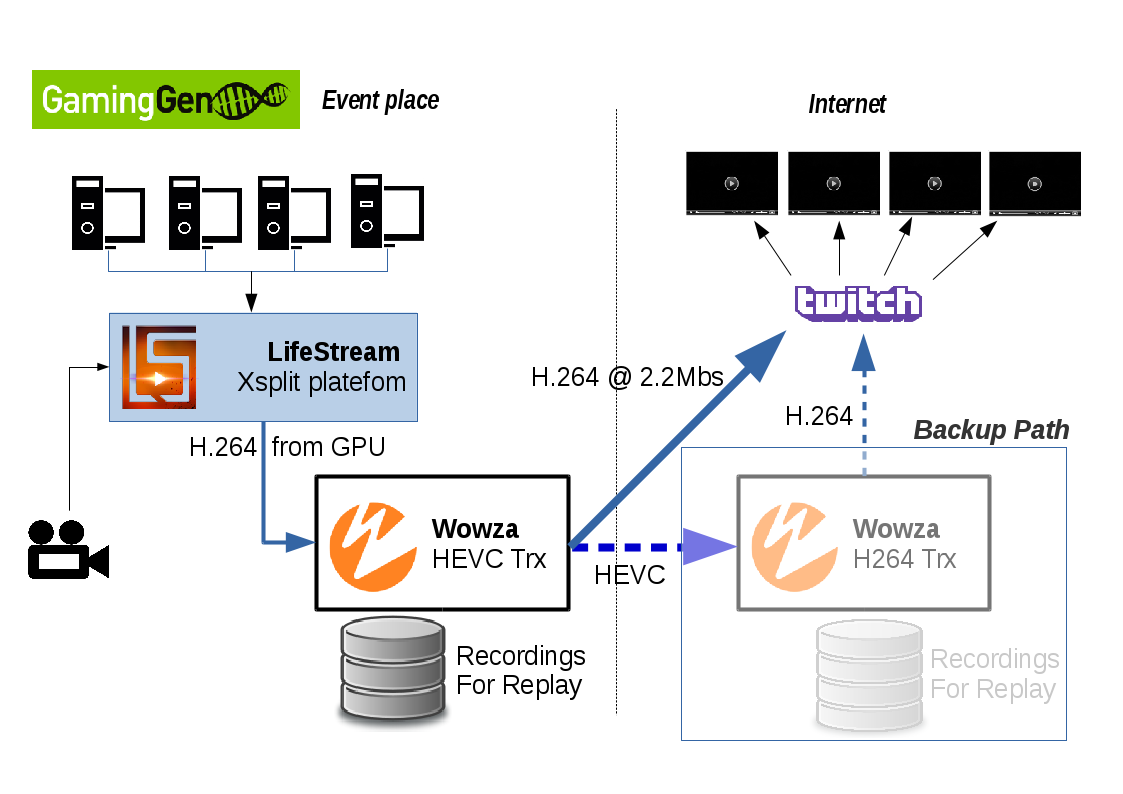